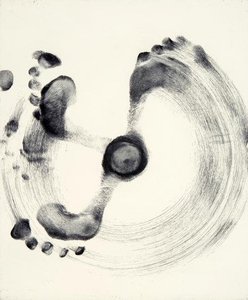 American dancer, choreographer and visual artist Trisha Brown (1936-2017) could have stuck to her training in modern dance, but the times and her radical nature made her evade her learning to gradually weave a personal language from the laws of physics, the intelligence of the body, the liberated imagination and a poetic relationship to the universe. She drew from her body all her life, while working to clarify her choreographic language. In one minute or three hours, her creations transport the audience through the apparent "magic" of kinaesthesia, that sense of the body that translates the visual perception of movement into an inner sensation.

Since the early 1970s, Eva Karczag practices, teaches, and advocates for explorative methods of dance making. She performs solo and collaborative work internationally. She danced with the Trisha Brown Dance Company (1979-1985) and continues to teach through the company education program in New York and elsewhere. Her performing and teaching are both informed by dance improvisation and mindful body practices which engender trust in the body's innate capacity for ease, efficiency and integrated openness.

After working in Paris first at Artservice International, then at Théâtre de la Bastille, the American Center and Cartier Foundation..., as well as assisting, producing, organising and managing tours and/or being an « outside eye » for many performing artists… she focused on translating dance books and films. She is now developing a series of audiovisual essays, exploring the nature and effects on herself (on all of us?) of the careers of several artists with whom she worked throughout her life (Trisha Brown, Steve Paxton, Richard Foreman, Merce Cunningham…), naturally choosing for the life in their mysteries.